As a whole, Africa is the warmest continent. Despite Africa having a symmetrical position around the equator (between 35 degrees north and 35 degrees south), there are major differences in the climate zones. Farther north and south there are zones of Mediterranean climate. Africa’s hottest regions are in southern Sahara with maximum temperatures in many places of more than 50 degrees and annual average temperatures of 28 degrees. Due to radiation in clear desert air, there are large variations in day and night temperatures.

South of the equator, the climate zones are more complicated due to topographic conditions and greater influence from the sea. In central areas there is savanna climate. Desert climate prevails in a narrow strip along the west coast of Namibia, while large stretches of east coast have tropical climates.

More than 60 percent of Africa is in the tropical climate zone. At the equator there is a rain belt between the subtropical high pressure belts. The most precipitous areas are north and east of the Gulf of Guinea and on the east coast of Madagascar, with local up to 10,000 millimeters of annual rainfall. In the Sahara, the lowest measured rainfall is 0–50 millimeters.

One third of mainland Africa receives more than 50 percent of rainfall in a three-month rainy season. Drying time is only lacking around the equator and in some coastal areas. There are two annual rainy seasons on the savannas. On the African highlands and in the Sahel (the transitional zone between the desert of the Southern Sahara and the savannah), rain may be absent in whole or in part, leading to mass deaths among animals and famine in populations.

Usually, there is little wind over Africa. However, low pressure off the Mediterranean coast can cause strong desert winds. A dusty stream of air, the Passat, blows off the northeastern edge of the Sahara and occasionally reaches all the way to the Caribbean. Surface water drives away from the west coasts on both sides of the equator and provides a flow of cool deep water that can give fog or mist. 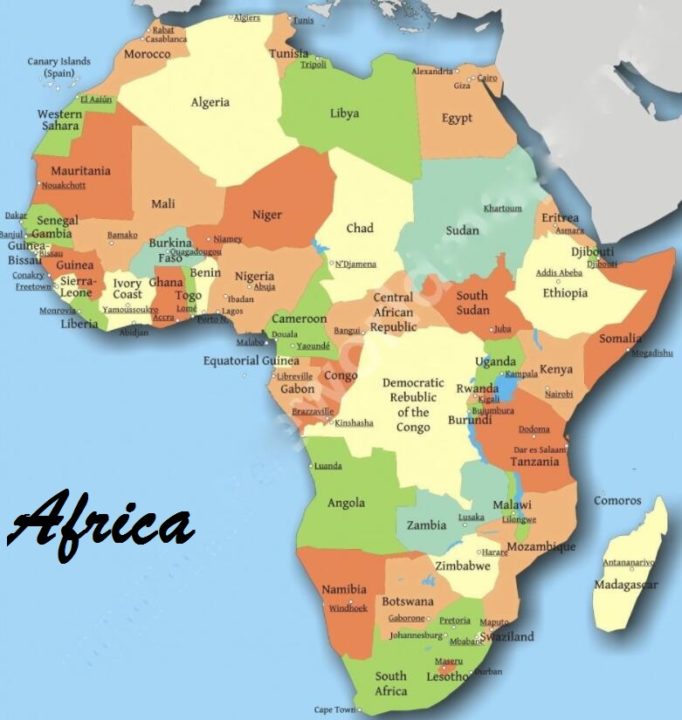 Africa’s vegetation follows the natural conditions and vary from native forests as in eastern Congo to savannah as in Kenya and nearly barren sand desert like the Sahara. High mountains have a special alpine vegetation. The boundaries of the Flora zones follow an axis from east to west.

Plant geography is closely associated with northern Africa with the driest areas of southern Europe. In the northwestern part of North Africa, there are evergreen deciduous forests with, among others, aleppo fur, cork oak and olive trees. Otherwise, North Africa is almost without forest and is characterized by a vegetation of evergreen shrubs. Forests are being planted in several places to stop erosion.

In North West Africa there are also salt steppes with halophilic (salt-consuming) herbs and espartograss. In the vast desert areas south of the Atlas Mountains and Tunisia, Libya and Egypt there is scarce or virtually no vegetation. In the dried-up river beds and oases, where groundwater reaches the soil surface, grains, fruits and dates can be grown as well as some vegetables in the winter.

South of the desert belt, steppe vegetation turns into savanna, which is characteristic of South Sudan, Kenya and Tanzania. The savannas vary from grass-savanna to actual savannahs with the growth of thorn bushes, monkey bread trees and scattered acacias, which, especially along rivers, form a light forest with an undergrowth of bush growths.

In the lowland areas along the Gulf of Guinea and in Central Africa, there are tropical rainforests with tall trees and creeping plants. Since about 1900, woods have been harvested from noble woods, and the rainforest had a much wider distribution in the past than today. In many places, the local people’s sweat consumption has also made great forays into the forest.

In the southern Congo, the rainforest is replaced by wooded savanna. During the dry season, savannas are exposed to fire; Smoke clouds from burning areas are characteristic.

On high mountains in East Africa there is a very distinctive vegetation of, among other things, Lobelia species.

The flora around Cape Town in South Africa is unlike the rest of Africa, with many species not found anywhere else in the world, and is considered a separate flora kingdom. Also in Madagascar there are many endemic plant species; here are large areas characterized by logging. 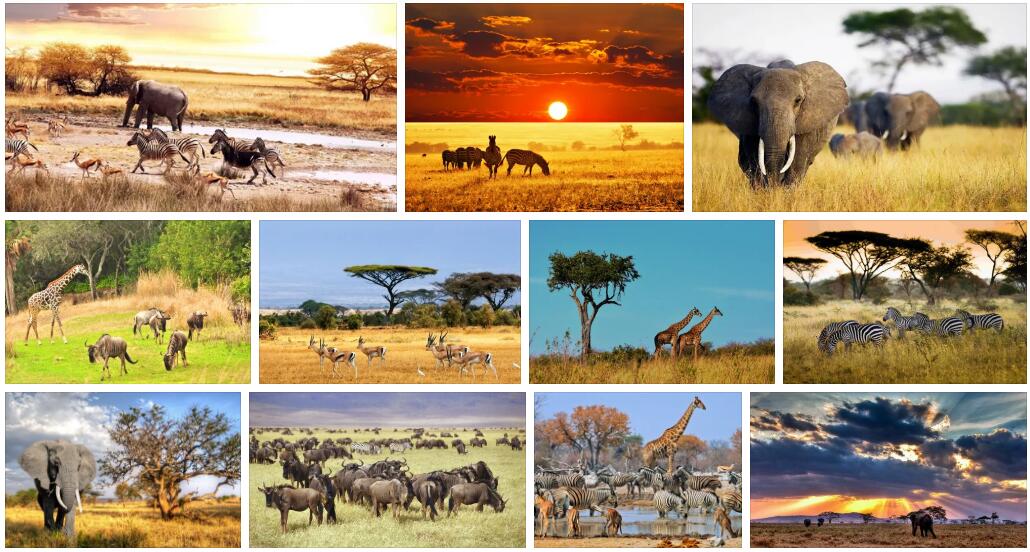 Animal Geographical divided Africa into two regions: the pale Arctic region north of the Sahara and the Ethiopian region south of the Sahara. Sometimes excreted Madagascar and the Indian Ocean as a separate region. See Countryaah for more countries in these regions.

The fauna of North Africa is similar to that of southern Europe. Mammals such as elephant, giraffe and leopard were exterminated in North Africa during Roman times. The dromedary, which is typical of North Africa today, was introduced from Southwest Asia. Other things such as berry monkey, jackal and desert reef are characteristic mammals. Scorpions are common invertebrates in the desert.

Sub-Saharan Africa has the richest wildlife on the savannah, with numerous grazing animals such as antelopes, buffalo, rhino, giraffe and elephant. There are large herds of wildebeest and zebras. Large predators on the savannah are lion, leopard, cheetah and hyena. There are hippos and crocodiles in rivers.

In the rainforest there are many monkeys; Among the largest are gorilla and chimpanzee. Also in the rain forest are big game like elephant, buffalo and okapi. In the wetlands, birds such as herons, ibises, pelicans and flamingos live. Sub-Saharan Africa is the most important wintering area for many of our migratory birds.

The reptiles are represented with chameleons and many snake species, such as the dreaded poison snakes mamba and cobra, as well as numerous lizard species. Africa’s largest snake is the rock python up to seven meters long, and the largest lizard is the nilvaran, which can grow two meters long.

Africa has large incidences of invertebrates, among these malaria mosquitoes and tsetse fly that are disease-bearing, and has a major impact on both humans and livestock. In tropical forests, the big goliath beetle and the savannahs are grasshoppers and termites.

Many countries are working to preserve the original fauna in national parks, wildlife sanctuaries and conservation areas.