Ivory Coast. At the beginning of the year, the situation in the conflict that split the Ivory Coast since 2002 seemed completely locked. Even more surprising was the news in March that the government and the rebels from the north had made peace after mediating the government in neighboring Burkina Faso. Former rebel leader Guillaume Soro was appointed prime minister and formed a broad unity government. Amnesty was declared retroactive for war crimes, including rape. Only financial crimes were exempted.

In April, dismantling of the buffer zone that divided the country began in the middle. UN troops and French soldiers patrolling the zone began moving away and a joint government and rebel force was stationed in the area. Human rights groups raised alarms that the number of civilian assaults increased dramatically following the retreat of foreign soldiers.

According to CountryAAH, Yamoussoukro is the capital city of Côte d’Ivoire. Many judges were skeptical about the peace agreement because the citizenship issue, which was the cause of the unrest in the immigrant-dense country, was not resolved. The difficult process of reviewing the right to citizenship and handing out ID cards began in September. During the year, the disarmament of the irregular armed forces also began. The World Bank, which suspended lending to Ivory Coast in 2004, allocated US $ 100 million to the disarmament. 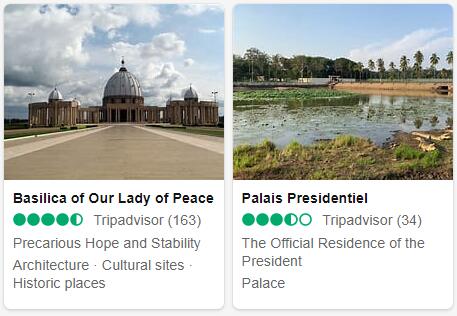 That there was suspicion of the peace agreement even among the former rebels was shown when Guillaume Soro was subjected to a murder attempt when he visited his own fortress Bouaké in the north in June. Three rockets hit his aircraft after landing.

In October, the UN Security Council extended sanctions on the Ivory Coast for a year, but declared itself ready to review the measures if free elections are held by April 2008. The sanctions mean that the Ivory Coast is not allowed to buy weapons or export diamonds. Two leaders of the presidential loyal force Young Patriots and a rebel commander are not allowed to travel abroad and their financial assets abroad are barred.

The Dutch company Trafigura Beheer BV paid almost US $ 200 million in damages for the poisoning dump that killed up to 16 Ivorians in 2006. The victims protested against the low compensation they received after the state retained about half the sum.

Ivory Coast weather in March, April and May

Average daily temperatures between 31 ° C and 37 ° C can be expected over the next three months. It gets warmest in March in Ferkessédougou, noticeably cooler in May in Abidjan.

Do you want to go on a beach holiday? The water temperatures are in March, April and May at about 28 ° C. This is great weather for a great time on the beach and in the water.

You can expect around 6 days of rainfall in March, around 9 days in April and around 14 days in May.

In the period from March to May, the sun shines an average of 6 to 8 hours a day. The sunniest weather is in March in Ferkessédougou, but with less sun you have to get by in Abidjan in May.

Yamoussoukro, administrative capital of the Ivory Coast, 275 km northwest of Abidjan; 207,000 residents (2015). Yamoussoukro, who was President Houphouët-Boigny’s birthplace, is the city of residence as well as the headquarters of the country’s only political party. In 1983 it was decided that the capital functions should be moved from Abidjan to Yamoussoukro, but the country’s legislative assembly still meets in Abidjan. The business sector in the city is dominated by the administration and the wood industry. In the city is Notre-Dame de la Paix, which is the world’s largest church.